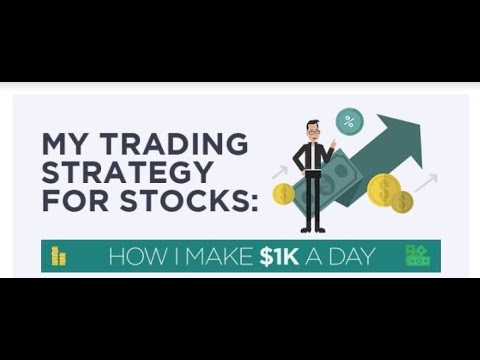 Like overplayed Pop songs, how many times have you heard some guy or gal trying to pitch get-rich-quick schemes? If that’s what you’re looking for here, look elsewhere. People who have succeeded in applying my $1k a day strategy understand the sweat equity and follow through it takes to get to a place of financial overflow.

My step by step process for entering and exiting the stock market.

Before buying: Please read the FAQs for additional details about my process.

This is my quick tips guide to trading stock. Use this to get started on your trading journey.

I’m Jeremy. Not that you really care, or that it even matters. If you’re here, you’re probably here to create a sustainable way to quadruple your money.

Over the years I’ve had my idealistic bubble burst understanding that there is no such thing as a free lunch. Effort and persistence is what gets rewarded, and I’m here to share my experience with you.

Just under a decade ago, I decided to dabble in the stock market. Let’s pour a drink for the now defunct CapitalOne Sharebuilder, RIP, you taught me some hard lessons. One of which was emotional trading. Even if you don’t know what that means, picture this:

A buddy gives you a call telling you about this new sports drink company coming out with a product made of hemp. Your buddy tells you it’s a growing market, you should jump in now, and how rich you’re going to be for getting in early. Hundreds of dollars sunken into a penny stock that’s been pumped and dumped so many times you’re surprised its still listed, you’re still not sunbathing on the yacht you imagined you’d have by now. You still hold on, having faith, sending death stares out into the ether for the universe to drive your beloved stock up, even though the numbers are telling the story of failure.

That was me. Numbers don’t lie.

This example, among others, led to a loss of a few thousand dollars over time. Until I decided to humble myself and take the warm fuzziness out of my trades

I hope you are enjoying my page everyone! If earning an extra $1,000 a day, a week, or a month could help you pay off your student loans or any other bills you have then stock trading is the option for you. The following steps helped me:

You can watch all my trading videos on YouTube for free! Plus, by buying my strategy, "How I Make $1,000 a Day" you will receive my guidelines as to how I pick my stocks! That means you learn when, why, and how I enter and exit the market.

In life we often hear or see these quick money ideas, like earn $10k in a day sitting at home. However by my experience, over all these years, there is nothing as free lunches. There is sheer struggle and persistence … Read more

WHAT I WOULD DO IF I HAD A MILLION DOLLARS!

By: Jeremy Lawson I won't bore you with useless commentary, but instead get right to the point so you may understand my reasoning. If I had a million dollars, I would buy real estate in South Africa (SA) for investmen… Read more